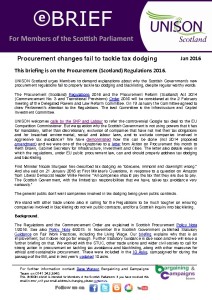 This briefing is on the Procurement (Scotland) Regulations 2016.

The Procurement (Scotland) Regulations 2016 and the Procurement Reform (Scotland) Act 2014 (Commencement No. 3 and Transitional Provisions) Order 2016 will be considered at the 2 February meeting of the Delegated Powers and Law Reform Committee. On 19 January the Committee agreed to draw Parliament’s attention to the Regulations. The lead Committee is the Infrastructure and Capital Investment Committee.

UNISON welcomes calls by the SNP and Labour to refer the controversial Google tax deal to the EU Competition Commissioner. But we question why the Scottish Government is not using powers that it has for mandatory, rather than discretionary, exclusion of companies that have not met their tax obligations and /or breached environmental, social and labour laws, and to exclude companies involved in aggressive tax avoidance? We have demonstrated how this can be done (incl 2014 proposed amendment) and we were one of the signatories to a letter from Action on Procurement this month to Keith Brown, Cabinet Secretary for Infrastructure, Investment and Cities. The letter also details ways in which the regulations, under EU public procurement law, can and should properly address tax dodging and blacklisting.

First Minister Nicola Sturgeon has described tax dodging as “obscene, immoral and downright wrong.” And she said on 21 January 2016 at First Minister’s Questions, in response to a question on Amazon from Liberal Democrat leader Willie Rennie: “All companies should pay the tax that they are due to pay. The Scottish Government, with the limited tax responsibilities that we have, takes tax avoidance very seriously.”

We stand with other trade unions also in calling for the Regulations to be much tougher on ensuring companies involved in blacklisting do not win public contracts, and for a Scottish inquiry into blacklisting.

The Regulations and the Commencement Order are explained in Scottish Procurement Policy Note 1/2016. See also Policy Note 6/2015. In November the Scottish Government published Statutory Guidance on Fair Work Practices, including the Living Wage. Our briefing explains why that is an improvement, but it does not go far enough. Further Statutory Guidance is due soon and we will issue a further briefing on that. We worked with the STUC, other trade unions and wider civil society to call for strong action in procurement on tackling tax avoidance and blacklisting, along with other measures for ethical and sustainable procurement. These were included in the 10 Asks, campaigned for during the passage of the Bill, and in last year’s updated 10 asks.
See links in PDF
MSP e-briefing: Procurement changes fail to tackle tax dodging and backlisting – Jan 2016

This website uses cookies to improve your experience. By continuing on this site your are consenting to their use. Find out more.