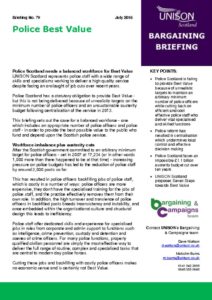 UNISON Scotland represents police staff with a wide range of skills and specialisms working to deliver a high quality service despite facing an onslaught of job cuts over recent years.

Police Scotland has a statutory obligation to provide Best Value – but this is not being delivered because of unrealistic targets on the minimum number of police officers and an unsustainable austerity budget following centralisation of the service in 2013.

This briefing sets out the case for a balanced workforce – one which includes an appropriate number of police officers and police staff – in order to provide the best possible value to the public who fund and depend upon the Scottish police service.

After the Scottish government committed to an arbitrary minimum target for police officers – set in 2007 at 17,234 (or in other words 1,000 more than there happened to be at that time) – increasing pressure on police budgets has led to the reduction of police staff by around 2,000 posts so far.

Police staff offer dedicated skills and experience for specialised jobs in roles from corporate and admin support to functions such as intelligence, crime prevention, custody and detention and scenes of crime officers. For many police functions, properly qualified civilian personnel are simply the most effective way to deliver the full range of routine, complex and specialised tasks that are central to modern day police forces.

Cutting these jobs and backfilling with costly police officers makes no economic sense and is certainly not Best Value.

The cuts in police staff have been exacerbated by the creation of Police Scotland in 2013 with a new austerity target of a £1.1 billion saving over a ten year period.
Police reform has not led to Best Value
Police Scotland took the place of eight police authorities in April 2013 as a result of the Police and Fire Reform (Scotland) Act 2012. The driving force behind police reform – and that of the fire service which was similarly reorganised at the same time – was to save money and ostensibly provide Best Value for the public who fund the service through taxes. The 2012 Act placed a statutory duty of Best Value on the Chief Constable and the Scottish Police Authority.

Best Value in Public Services as defined by the Scottish Government in May 2011 requires “continuous improvement in performance whilst maintaining an appropriate balance between quality and cost” and “regard to economy, efficiency, effectiveness, the equal opportunities requirements, and to contribute to the achievement of sustainable development.”

It cannot be argued that Police Scotland has seen “continuous improvement” with an “appropriate balance between quality and cost” – and “sustainable development”.

Meanwhile crime clear-up rates have worsened in Scotland with the high and increasing police officer ratio. A Reform Scotland report ‘The Thinning Blue Line‘ in June 2015 observed that “the number of crimes cleared-up per FTE police officer has fallen from 12 in 2006/7 to 8 in 2013/14″.

It quotes workforce modernisation studies in England and Wales showing that “further civilianisation allied to a reconfiguration of police personnel is associated with a wide range of performance, economic, stakeholder and community benefits for police forces.”

The research indicates that workforce modernisation – in other words, a balanced workforce – allows:

Need for business case and adequate resources
The situation of Police Scotland is clearly not sustainable. The new structure was established without a full business case and is now facing a large budget deficit – estimated in December 2015 by Audit Scotland at around £85 million.

As a result of being removed from local government control, Police Scotland became liable for VAT which further erodes the resources available to provide an effective service. A letter from Police Scotland Chief Constable Phil Gormley to the House of Commons Home Affairs Committee in June 2016 revealed that Police Scotland has paid out £76 million in VAT which cannot be reclaimed, over the first three years of its existence.

In addition, the new centralised structure has resulted in a loss of local democratic accountability – with the replacement of local councillors on police boards by a Scottish Police Authority appointed by central government – and the closure of local police stations and centralisation of call centre operations.

As well as its impossible financial targets, Police Scotland has faced a number of crises in its short life so far – including controversies over armed police patrols, the failure to properly deal with a fatal accident on the M9, and the resignations under pressure in 2015 of its original chief constable Sir Stephen House, and the first chair of the Scottish Police Authority Vic Emery.

New Parliament, new opportunity for Police Best Value
The UNISON Scotland police mini-manifesto published ahead of the May 2016 Scottish Parliament elections reinforced our call to move to a balanced workforce for policing that delivers best value.

Although the Scottish government election manifesto for May 2016 moved a little away from its hard line commitment to maintaining police officer numbers at the arbitrary target of 17,234, there is still no proper business case in place for Police Scotland more than three years after its creation. This has been repeatedly promised after demands by Audit Scotland, MSPs and police staff in UNISON.

The new chair of the Scottish Police Authority, Andrew Flanagan, chair, told Holyrood Magazine in February 2016: “What we need is a highly skilled responsive mobile workforce. That may be police officers, that may be other people, and it’s the totality of that resource that’s important in terms of what it looks like rather than some relatively arbitrary number.”

We believe that Best Value cannot be realised from Police Scotland in the absence of a proper business case – this should include a fully researched evaluation to establish how many officers are needed to police Scotland and a clear plan to implement a balanced workforce with the correct types of staff or officers performing roles appropriate to their qualifications and the needs of the organisation.

Internal Police Scotland figures show that barely half of all officers are on the frontline, The Herald 15 Nov 2015
www.heraldscotland.com/news/14032524.Revealed__only_half_of_all_Scottish_police_officers_are_on_the_frontline/