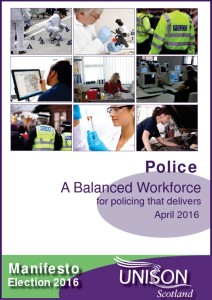 Since the establishment of Police Scotland police staff have borne the brunt of a process of centralisation, budget cuts and politically driven targets. This process has been bad for policing, bad for communities and bad for staff. UNISON Scotland calls for policing in Scotland to be properly resourced with a balanced workforce responsive to locally determined priorities.

The new Chief Constable has said he is committed to developing a “sustainable operating model”. Cutting millions from budgets and demanding the same, or more, work from a dwindling number of Police staff is not a “sustaining operating model”. UNISON Scotland is opposed to neither change nor efficiency, but cutting tens of millions from budgets year on year cannot continue without adversely impacting on policing. Those who seek to govern Scotland should also seek to ensure that Scotland’s Police Service is adequately resourced to keep Scotland safe.

Civilian staff have been cut by over 2000 since 2010 – a 1 in 4 decrease police staff jobs. Many of these posts are just backfilled by more expensive police officers. This has driven a reversal of progress in civilianisation over many years and a centralisation agenda. The political target of 1000 extra uniformed officers has been clearly shown to have been detrimental to standards and efficiency across Police Scotland – resulting in less qualified, higher paid, uniformed officers carrying out work which could more effectively be performed by police staff. We should not forget that the Scottish Police Authority has a statutory duty to ensure ‘Best Value’. Substituting police officers for civilian staff is not ‘Best Value’.