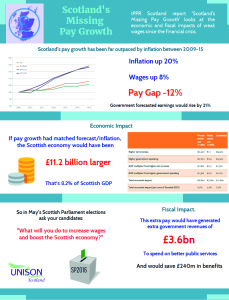 IPPR report confirms UNISON’s view that falling real terms pay has had a considerable negative effect on the economy.

The IPPR report which is published today (23 March 2016) confirms that, pay in Scotland has fallen in real-terms by 12%, with private sector pay falling further than public sector pay. It also confirms that had pay risen in line with expectations, the Scottish economy would be £11.6bn larger than it is today

The analysis – which compares official Office for Budget Responsibility (OBR) 2011 predictions with today’s reality – shows that while average pay for Scottish workers rose by 8 per cent between 2009 and 2015, this is offset by an increase in inflation of 20 per cent over the same period. This means real pay packets in Scotland are 12 per cent lower today than they were in 2009.

Scotland’s record over this time is better than the wage growth in the rest of the UK, due to factors including higher productivity and trade union membership, but IPPR Scotland’s analysis shows private sector workers’ wages have dropped 13 per cent, and public sector workers’ pay has dropped 10 per cent, compared to inflation.

With greater powers coming to the Scottish Parliament, including significant devolution over income tax on earnings, boosting wage growth in Scotland will be one of the key factors in determining the size of Scotland’s budget in the years to come.

Dave Watson, head of public affairs at UNISON Scotland said, “This report highlights the importance of higher wages, not only to workers, but to Scotland’s economy and our hard pressed public services. The £11.6bn gap indentified in this report would make a huge difference to the faltering economic recovery. In the coming elections, UNISON Scotland will be asking political parties to explain how their policies would address the pay gap.”