Signposting the ways Scotland could limit the damage 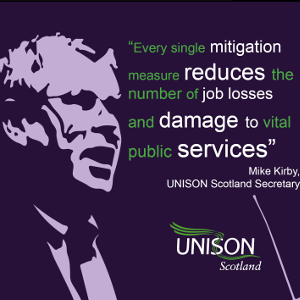 The Conservative Government’s austerity programme will result in around a further £2 billion of cuts to Scotland’s public services.

There is a broad consensus across Scotland that austerity is damaging to public services and the economy.

UNISON Scotland is part of the campaign against austerity. 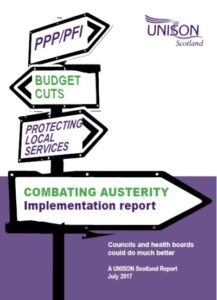 Councils and health boards could do much better. A UNISON Scotland Report July 2017.

New figures from councils and health boards demonstrate the importance of its proposed measures designed to help protect services and jobs as further austerity cuts bite.

UNISON Scotland’s Combating Austerity Implementation Report forecasts in the report that a minimum of £250m could be saved over ten years, with billions more pounds of potential savings if the Scottish Government properly tackles the financial scandal of PPP/PFI. Each pound saved contributes to protecting vital public services and the jobs needed to deliver them.

Newly elected councils will be asked to take on the proposals, as appropriate to local circumstances.

Health boards will also be asked to examine relevant ways to save and raise money, with the potential for them borrowing from councils to buy out PPP/PFI contracts, as has happened in England. 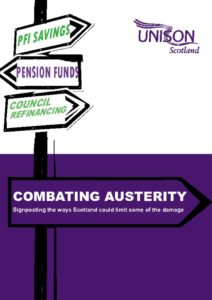 As part of combating austerity we should look at practical ways in which the Scottish Government, councils, health boards and other public bodies can mitigate against the worst of the cuts to come. Every sensible mitigation measure government and public authorities can take reduces the number of job losses and damage to vital public services and the economy.

Our Combating Austerity paper offers signposts to measures that would help combat austerity including: 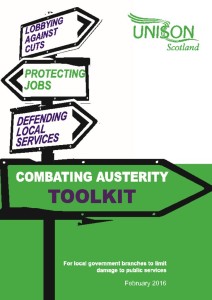 Use the Combat Austerity Toolkit resources to help your branch campaign to limit the damage to public services.

See also our Public Works Toolkit for campaigning against cuts

Damage – voices from the front line