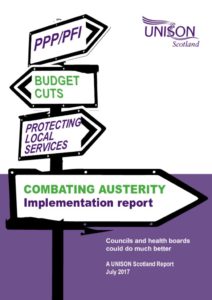 A campaign to help Scotland’s public sector save and raise millions of pounds is being stepped up today (20 July 2017), with a new report from UNISON on combating austerity.

UNISON Scotland forecasts in the report that a minimum of £250m could be saved over ten years, with billions more pounds of potential savings if the Scottish Government properly tackles the financial scandal of PPP/PFI. Each pound saved contributes to protecting vital public services and the jobs needed to deliver them.

Newly elected councils will be asked to take on the proposals, as appropriate to local circumstances, with ideas including:

Health boards will also be asked to examine relevant ways to save and raise money, with the potential for them borrowing from councils to buy out PPP/PFI contracts, as has happened in England.

“We are pleased to see two councils receiving a combined £450,000 annual income from renewable energy generation and £500,000 in annual savings made by three councils who restructured PPP contracts. Others are doing good work looking into taking similar action.

“But overall, both councils and health boards could be doing a lot better. Many said they had not considered some of these very sensible options. Others are doing so but did not provide the savings figures, while in the area of PPP and PFI too many use exemptions in Freedom of Information legislation to withhold details that we believe the public has a right to know.”

UNISON is calling for the Scottish Govenrment to act on buying back the most expensive PPP/PFI schemes, working in partnership with councils if it has insufficient capital allocations, as councils can use prudential borrowing powers.

Dave Watson added: “It’s been calculated that up to £12 billion could be saved on PPP/PFI contracts. If only a tenth of that were achieved, it would release £1.2 billion of public funds.

“And more should be done by public bodies on renewable electricity generation. If Scottish Water can, through its own investment in renewable energy, and hosting private investment, facilitate the generation of more than twice the amount of energy it consumes annually by 2018, councils and health boards could follow that example and save millions on their own energy bills, while bringing in much needed funds.

“There are plenty of examples of European cities which do this, generating Income and providing jobs.”

The report highlights a range of examples around Scotland including Highland council saving £2.5m through PPP contract renegotiation and Aberdeen City Council raising £370m by becoming the first Scottish council to issue a bond, which will support a £1 billion capital programme, investing in vital infrastructure for the city.