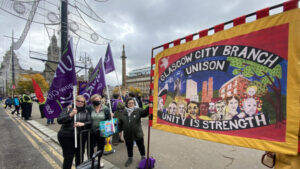 UNISON general secretary Christina McAnea (above, left) stepped right off the train in Glasgow today (Friday) and joined some of the city’s activists as they prepared to take part in the youth climate march.

And she had a message for the union’s members all over the country.

“I’ll be thinking of you marching across the UK – as I march in Glasgow. Thank you for taking part.”

The youth climate march, which saw thousands of young people gather in the Scottish city and was to feature a speech by Greta Thunberg, is a prelude to Saturday’s Global Day of Action for Climate Justice, when civil society and trade union members are expected to assemble in cities and towns across the UK.

On Monday, the general secretary is to launch UNISON’s own environmental report, which outlines the course of action the government must take to decarbonise public services.

“Climate change affects all of our communities, all of our families and all of our workplaces. That’s why it’s so important that all of us, as trade unionists, are taking action in cities across the UK,” she said this afternoon.

“We’ve heard a lot about how COP26 is the last chance to keep temperature rises below 1.5 degrees.

“Whether these talks will succeed or not remains to be seen. But in being part of this protest we’re sending a clear signal on behalf of the working people we represent across the UK that we demand world leaders to do the right thing and put the interests of the planet and future generations first.

“And as trade unions we also have a message about how to cut carbon emissions,” she continued.

“The Tories and the right believe that investors and free markets will create the solutions. But as we all know, it was unbridled capitalism that landed us in this mess in the first place. We need solutions underpinned by trade union values of solidarity, equality and internationalism.”

UNISON’s report offers a route “to a green new deal, decent green jobs, an end to fuel poverty and a just transition to a new economy,” she said.