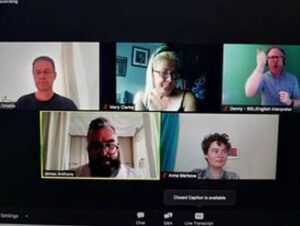 Action on climate change has always been important in UNISON, but is now one of our absolute top priorities, key speakers stressed at last night’s Conference fringe meeting.

All the UNISON speakers encouraged branches, if they haven’t already, to ensure they have environment reps – and they highlighted examples of branch green workplace activities including scrutiny of employers’ climate emergency plans.

NEC Policy Chair James Anthony and NEC member Stephen Smellie, UNISON Scotland Depute Convener, both emphasised that climate action should not be seen as separate from other UNISON work.

“It is integral to what we do day to day as negotiators and bargainers,” James said.

He was in the chair and introduced the event, listing the trade union movement’s three key demands – Just Transition, social dialogue and ambitious fair climate plans that will get us to meeting emissions reduction targets.

Stephen said UNISON is part of the COP26 international civil society coalition mobilising for the UN climate talks in Glasgow in November and said branches might want to get involved in local climate hubs and plan for events in the build-up to COP, including during Green UNISON Week, 18-26 September.

While it is hoped to still have big demonstrations in Glasgow, particularly on Saturday 6 November, these unfortunately cannot be the enormous international numbers originally planned for pre-Covid. The Covid situation is constantly under review. Climate campaigners UK wide are also planning decentralised local demonstrations in their own areas and online mobilisations.

Stephen detailed UNISON’s commitment and action over many years on climate, including work in Scotland with Stop Climate Chaos Scotland, the Scottish Food Coalition and the Just Transition Partnership, bringing together the STUC, trade unions and environmental organisations including Friends of the Earth and WWF.

He urged branches to step up campaigning on pensions divestment, recommending the guide on the UNISON website.

Stephen added: “I would suggest whatever we’re doing in Glasgow, you might want to think how that might be reflected in Bristol, London, wherever you are.”

The COP26 Coalition website has details of ‘From the Ground Up’ online mobilisations which have had speakers from throughout the world, with more planned.

“There are lots and lots of things branches can do,” Stephen said. “Look out for details of Green UNISON Week and activities around that.”

She spoke about what branches can do, noting her branch’s negotiated green workplace agreement providing facility time for environment reps. She said this needs to be reviewed and updated since the council declared a climate emergency. They also work with other branches in the North West in a Climate Emergency Group.

Anna Markova, who works for the TUC, including on the Trade Union Sustainable Development Advisory Committee, said that the UK government’s investment in action on climate and green recovery is just a fraction of other countries, for example only one sixteenth of the US public investment.

“All the rhetoric is not backed up with the money we need to make these changes happen,” she said.

The ‘Climate Emergency and the Greening of Public Services’ SDC fringe webinar had an audience of 70 and members who registered will be sent a recording.