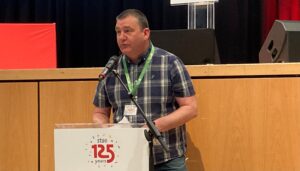 #STUC 22 Congress affirmed that council services are vital to our society and should be at the heart of economic recovery from COVID, through community wealth building.

The STUC will campaign for and promote a community wealth building model.

Supporting the composite, UNISON’s Jim McFarlane said that freeports or free trade zones are not new. They exist in a number of places across the world. And he warned that they allow goods to be imported, manufactured and re-exported without being subjected to regulation, checks, paperwork or tariffs

On the Scottish government trade minister’s claims that Scotland’s Green Freeports will be sustainable, fair and green, he pointed out that no evidence has been presented as to how fair work principles will be enforced or how there will be genuine sustainability.

“Giving public money to multi nationals with a track record of blacklisting and doing all they can to avoid taxes does not install confidence for our movement.”

“Community Wealth building comes from carrying out the actions outlined in this motion not from handing over public money to multi nationals.

“Freeports don’t create new jobs. The evidence we have shows they create a 2 tier workforce, they suck in jobs from surrounding areas, fuelling de-industrialisation and a race to the bottom in employment practices.

“Let’s make sure the Scottish government listen to the voices of the trade union movement rather than the voices of big business,” urged Jim.