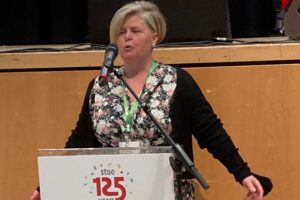 #STUC22 Glasgow’s equal pay campaign was spotlighted at STUC Congress in a motion from Glasgow Trades Union Council that congratulated the women involved in the 2018 strike action and demanded that Glasgow City Council abide by the agreement won then.

The STUC General Council will take steps to support the joint unions in Glasgow and across Scotland in their fight for equal pay in all sectors and occupations, using the findings of Fair Work to value women’s skills and labour. It will call on the Scottish Government to review public sector pay schemes to ensure they genuinely support equal pay and address pay discrimination.

UNISON’s Lyn-Marie O’Hara, a leader in the equal pay strike in 2018 as well as the most recent dispute, told delegates that in 2018 at Congress in Dundee she was up speaking about the great success, the achievement of half a million pounds paid out to our lowest paid women.

“As convenor for catering in Glasgow the stories I heard about what people were going to use that money for to change their lives was very sobering.

“It was giving some women the money they needed to escape from domestic abuse, some had booked their funeral so the cost wasn’t left to their family. And of course many more were using it for happier reasons, to take their families on holiday.

“But I’m saddened to say they the council tried to dump the deal.

To applause, Lyn Marie reminded us that none of the people she represents were able to work from home. “They went out every day and delivered the services people need.

“But the council tried to rip it up,” slammed Lyn Marie.

“But they failed, and the next interim payment people receive will be to put food on the table and shoes on children’s feet. There’ll be no room for luxuries. Our members don’t have that kind of a life.”