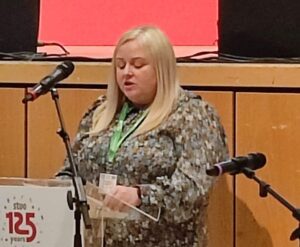 It backed calls for a major public sector campaign for above inflation pay rises for all public service workers; and for significantly increased investment in local government and other public services, including mobilising for a national pay demonstration.

Supporting the General Council led composite, UNISON’s Lorraine Thompson said that UNISON is fighting back on pay and for pay equality right across public services. She pointed to the spiralling costs of food and fuel and the massive hike in inflation – at its highest level for 30 years.

“Low wages and insecure work are the primary cause of child poverty in Scotland,” said Lorraine, adding that years of below inflation pay rises have eroded pay.

“There is a deeper-rooted problem in the continued undervaluing of skills in areas of work dominated by women, that is reflected in pay,” warned Lorraine, calling for appropriate reward for the increased workload and stress placed on staff during the pandemic.

Like Mark Ferguson, she pointed to the staffing crisis in social care and the NHS, where staff are burnt out after two years of COVID, leaving a massive problem of understaffing.

“An above inflation pay increase is crucial to stem the flow of staff leaving these services, begin to support the retention of current staff and improve recruitment into the growing number of vacancies.”

Lorraine called on the Scottish Government to do more to tackle low pay and the staffing crisis, especially since the majority of public service workers are women and low pay is endemic, and to provide decent funding for public services.