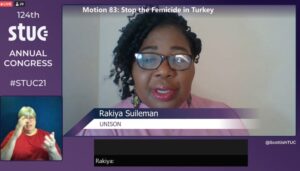 UNISON Scotland took its condemnation of the Turkish government’s treatment of women trade unionists, women activists and opposition political parties into Congress and delegates pledged action to combat misogyny and femicide in Turkey.

In a powerful and moving speech, UNISON’s Rakiya Sulieman won backing from Congress for her call for the STUC to join UNISON in sending solidarity to women in trade unions and in the women’s movement in Turkey, many of whom are in prison for demanding justice for women who protested against femicide.

The General Council will write to the UK government and the Turkish Ambassador to raise concerns with the Turkish government and urge them to maintain the country’s support for the Istanbul Convention and to take action to end femicide and violence against women.

Rakiya told Congress that Turkey is governed by one man – President Tayip Erdogan who has power over all aspects of the state, from who can sit in Parliament, who is appointed as judges, and who should run the Universities and the content of the curriculum in schools and higher education.

“Turkey claims to be a democratic but in reality subject to One-Man-Rule,” warned Rakiya.

“President Erdogan’s influence runs everywhere through politics, the war on the Kurds, relations with Europe and, critically, in reinforcing patriarchy in all aspects of life, including the workplace where women are excluded from promotions, at home – where government ministers have said that women should be, and that it is their duty to have 3 children at least.

“In the courts, where women are told that if the man who raped them agrees to marry them then the man does not need to go to jail.

“This promotion of a “traditional role” for women has seen the rights of women set back years.”

She described how, at one such protest organised at a hospital in Ankara in response to violence against women staff by members of the public and senior male staff members, women trade unionists were confronted and beaten by male security guards employed by the hospital.

“That’s not right, that women protesting against male violence are met with violence by men on the orders of the men running the hospital,” said Rakiya.

She spoke of how this rise in violence includes violence in the home, with 300 women killed in Turkey in 2020, a figure that is likely to be a gross under estimate.

“These deaths, murders of women by their partners, fathers, and brothers is femicide,” said Rakiya,

She condemned President Erdogan’s response to withdraw from the Istanbul Agreement. “What a disgrace!”

“And this is a President and a government that our UK Government is negotiating trade and arms deals with. Who Boris Johnson sees as a key ally in the post-Brexit world that he has led us into,” slammed Rakiya.

At the time of publication, the result of the vote was not in but there was no dissent in the debate.