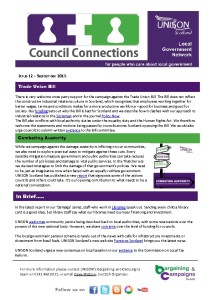 There is very welcome cross party support for the campaign against the Trade Union Bill. The Bill does not reflect the constructive industrial relations culture in Scotland, which recognises that employees working together for better wages, terms and conditions makes for a more productive workforce – good for business and good for society. Our briefing sets out why the Bill is bad for Scotland and we describe how it clashes with our approach to industrial relations in the Scotsman and in the journal Policy Now.

The Bill also conflicts with local authority duties under the equality duty and the Human Rights Act. We therefore welcome the statements and motions being passed by councils across Scotland opposing the Bill. We would also urge councils to submit written evidence to the Bill committee.

While we campaign against the damage austerity is inflicting on our communities, we also need to explore practical ways to mitigate against these cuts. Every sensible mitigation measure government and public authorities can take reduces the number of job losses and damage to vital public services. In the Thatcher era we devised strategies to limit the damage of that government’s policies. We need to be just as imaginative now when faced with an equally ruthless government. UNISON Scotland has published a new report that signposts some of the actions councils and others could take. It’s our opening contribution to what needs to be a national conversation.

In the latest report in our ‘Damage’ series, staff who work in Libraries speak out. Sending every child a library card is a good idea, but library staff say what our libraries need is proper financing and investment.

UNISON welcomes community justice being devolved back to local authorities, with some reservations over the powers of the new national body. However, we share concerns over the level of funding for councils.

The local government pension scheme is rarely out of the news with calls for infrastructure investments or divestment from fossil fuels. UNISON Scotland’s new web site Pensions Scotland brings you the latest news.

UNISON Scotland urges a new consensus on local taxation in our evidence to the Commission on Local Tax Reform.