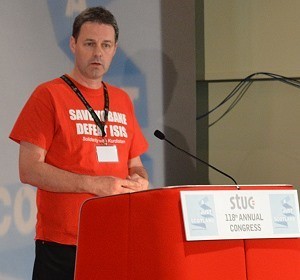 The STUC sent solidarity and support to the people of Rojava and Kobane and pledged to lobby the Government to do everything it can to ensure that humanitarian aid gets through to Rojava, to support the refugees from other parts of Syria and to ensure that Kobane can defend itself and its people.

UNISON Scotland’s Depute Convener, Stephen Smellie “was privileged to visit North Kurdistan, where he met refugees from ISIS attacks on the Yazidi and Kobane. People who are traumatised and in desperate need.”

Speaking in support of the composite Stephen said, “In Rojava people are conducting an experiment in building a democratic, secular, non-sectarian and gender equal society.

“This would be pretty radical if it was happening here. In the Middle East it is revolutionary. In contrast ISIS represents a medieval barbarity.

“Kobane has been liberated but the battle against ISIS continues as the struggle to re-build Kobane is beginning. We must support both these efforts,” urged Stephen.