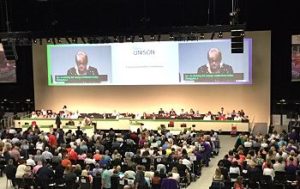 UNISON president says people should ‘reflect on some of the language used’ in EU debate.

Speaking of Ms Cox, a UNISON member on whose selection committee she sat, the president urged delegates – whatever side of the EU referendum debate they were on – to “reflect on some of the language that’s been being used”, and never let such events happen again.

“It isn’t right and it has to stop,” she said, voice choking with emotion, as she called on delegates to stand and observe a minute’s silence.