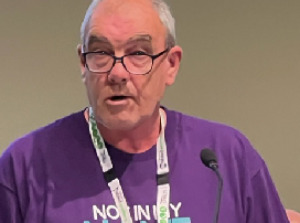 Following the debate on the NDMC motion, Not in Our Name, Conference went on to back another motion with the same title which expressed a vote of no confidence in the NEC for seeking to change the union’s rules without National Delegate Conference approval.

Speaking in support, Tam Hiddleston, Scottish Healthcare branch added his branch’s voice to a vote of no confidence in our NEC.

Tam said, “When workers decide which trade union will best represent them, which union they trust, most people choose UNISON.

“However, we now have an NEC that no longer wants to be part of that team.
“The rulebook tells us that the General Secretary is the principal officer of our union. The only person elected by every single member of our trade union.

“When Christina Mc Anea was elected, she was successful because 64,000 members of our union voted for her.”

Tam added, “NEC members are now apparently telling Christina that her services are no longer required.

“The motion reminds the NEC that they are accountable to this conference and their poor behaviour has to stop and it has to stop now.”

Following the hand vote, there was a call by more than 110 delegates for a card vote. This was won by almost two to one. The NEC will now need to consider how best to take on board the will of conference.