The first day of National Delegates Conference, saw delegates take a shot across the bow of the NEC as they passed two motions critical of their decision to pass a number of resolutions, considered by two pieces of legal advice to be in breach of rule and potentially unlawful.

After a very robust debate, delegates forced a U-turn on those resolutions and a commitment to take any further resolutions, which are or may be perceived to be rule changes, back to National Delegate Conference.

Backing a motion brought by the National Disabled Members’ Committee (NDMC), Not in our Name, delegates affirmed that it is conference’s democratic right to agree rule changes.

Moving, Sue Parkinson of NDMC stated, “This conference is the supreme rule making body of our union and it should remain so.”

Sue added, “Our rules are sacrosanct and for the benefit of all members not for one individual.”
There were excellent speeches from both sides, with emphasis from self-organised groups, concerned about conference being a safe space. Concerns were raised that if conference hands the rule changes over to the NEC, they will enact changes without the involvement of the wider lay membership.

Speaking in support of the motion, Tony Slaven, Scotland regional rep said “This motion isn’t about political allegiances, or UNISON left vs UNISON right. It’s about who the supreme decision-making body is and the limits of the NEC’s power.”

Tony reminded conference, “It’s you who make the policy in this union and it’s you who determines the rules,” making it clear to the NEC that the members run this union, not them.
Tony continued, “The NEC work for us and not us for them.” 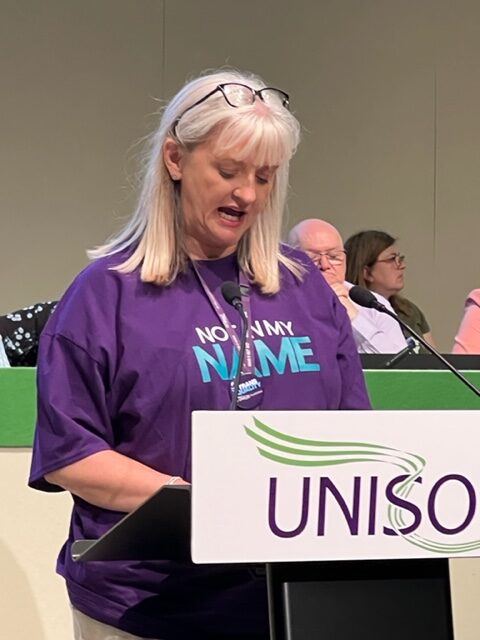 “Christina McAnea first female general secretary of our trade union speaks for me.”

Speaking against the motion, Mags McGuire, Dundee City Branch urged, “We need to stop the infighting, members need to accept the outcome of the NEC elections, and let the team get on with business.”

However conference took a different view and backed the motion.

By Watty Gaffney and Louise Noble