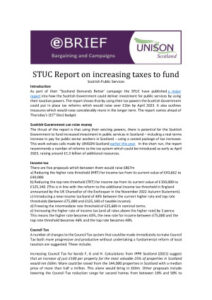 Our ebrief on the STUC Report on increasing taxes to fund Scottish Public Services. The report shows that by using their tax powers the Scottish Government could put in place tax reforms which would raise over £1bn by April 2023. It also outlines measures which would raise considerably more in the longer term.