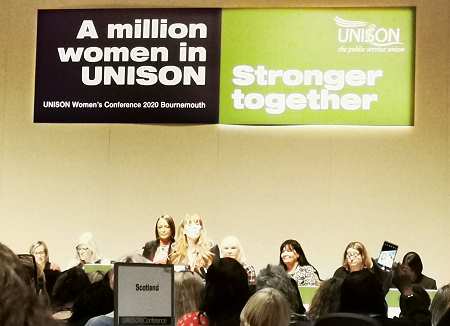 UNISON Women’s Conference sets the policy agenda on women’s issues for the union for the coming year. However it is much more than that.

As an event attended almost exclusively by women, it provides a safe space for women to tell their stories, and gives delegates the opportunities to hear how existing government policy impacts on the reality of women’s lives.

Speaker after speaker gave emotional testimony based on their own real life experiences, or those of families, friends or colleagues. Others spoke of their work as UNISON stewards and branch officers and the impact of workplace policies and cultures on the lives of themselves and their members. There was also the opportunity to share good practice in the different branches and Regions.

Scotland delegates spoke on and won support on a host of motions including the gender pay gap, awareness of women’s heart attack symptoms, the impact of domestic abuse, workplace support for mothers with sick or premature babies, the crisis in social care and the poverty caused by universal credit.

It was great to see two of our first time delegates, Alice and Kay getting up to contribute to the debate. Here is what they had to say about their first experience of a UNISON Conference.

Alice said: “UNISON Women’s Conference 2020 came at the right time for me, because I’ve been feeling pretty powerless recently. I’ve been wondering if I’m even helping anyone. Wondering, in the face of a huge amount of adversity particularly following the recent election results, if there was any point in trying to help.

“This was the first conference I’d ever attended, and I’m so glad I did. The stories I’ve heard; the ideas that have been shared; the collective caring that was apparent in every motion, and in every single woman in the room.

“All of these things have inspired me to go into the year ahead with a renewed purpose. I don’t feel so powerless now, knowing that there are a million women in UNISON standing behind me, and knowing that we’re not going anywhere.”

“I originally had no intention of getting up to speak. It was my first conference and I didn’t know how to go about it or what people spoke about. I had thought that those speaking to the motions would cover all the main points, and I couldn’t see what I, with no prepared speech, would be able to add.

“So, at the Regional meeting, I asked: ‘What do those speaking in support of motions talk about and add to the discussion?’

“When I think back to that, I smile for two reasons. Firstly, my question brought an instant offer of support and guidance to help me through making a speech, which instantly inspired me to do it, and secondly because it was the personal stories, told with such openness and passion, that had the biggest impact on me.

“I’m so glad I chose to speak, but even more so that others chose to do so too.”

As well as the motions supported by Scottish delegates, conference prioritised support for workplace campaigns and bargaining on issues which particularly affect women, such as the menopause, parental leave, and women’s health and safety. These will sit alongside wider political campaigning and lobbying to protect our NHS, to improve our welfare system, and to tackle climate change.

There was a key focus on promoting the profile of women in the union and in leadership roles, and hearing from inspirational women like Christina McAnea, Josie Bird and Angie Rayner will surely have encouraged delegates to see the possibilities.

The Scotland delegation was made up of branch representatives, some of them first time delegates to any UNISON Conference. Pat Rowland and Ann Forsyth were the regional delegates, with a role to move the Scottish motions and support the delegation.

Katrina Murray, Jean Kilpatrick and Elizabeth Rankin, attended in their roles on the National Women’s Committee, NEC member Davena Rankin attended as a delegate from the TUC Women’s Committee, and Kate Ramsden was one of a number of NEC women who came along.