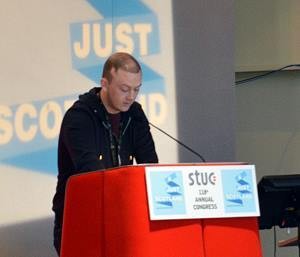 The STUC will press the Scottish Government to set up and fund an STUC administered vulnerable workers’ project as part of a wide ranging strategy to end the exploitation of young vulnerable workers in the fast food and related sectors.

Delegates condemned discriminatory practices which adversely affect all low paid, unorganised workers, but which particularly impact on young workers. The STUC will explore new ways of reaching and supporting young workers and will lobby the Scottish Government to ensure it plays its part.

Supporting the composite, Ryan Boyle, UNISON young member told delegates that the coalition’s statements that we are on the road to recovery couldn’t be further from the truth.

“Austerity has been a failure in every sense of the word,” slammed Ryan adding that young workers have taken some of the worst brunt, with research showing that average wages for those in their 20s now a fifth lower than in 2008/9 with 10% fewer young people aged between 20 and 24 in work over the same period.

He also condemned the deregulation and casualisation of the labour market, which has seriously impacted on young people and has contributed to the fall in wages.

“In the UK specifically, under 25s are now three times more likely to be unemployed than the rest of the population. This drives more and more young people into using foodbanks, and into the claws of unscrupulous payday lenders,” added Ryan, supporting the call for a campaign against the exploitation of young workers and the promotion of credit unions as an alternative to pay day lenders.