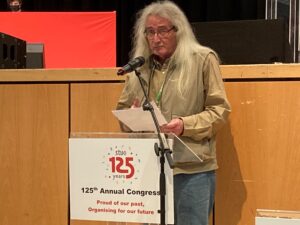 Congress backed UNISON’s call for the Scottish Government to suspend the partnership between Police Scotland and the Colombian Government until human rights are guaranteed.

Moving the motion, UNISON’s Tony Caleary said that Colombian state agents must be held to account. “We have all been long aware that Colombia is the most dangerous place on earth to be a trade unionist, social, environmental or indigenous activist.  More than 1,000 activists and 300 former guerrillas have been murdered since the 2016 peace agreement,” Tony said.

“You may not be aware that colleagues from UNISON in Northern Ireland were involved in brokering that peace deal, which ended a 50-year long conflict. They had already gained extensive experience of such discussions, and mediation, having contributed towards securing the Good Friday Agreement.”

“In addition to its contract with Colombia, Police Scotland recently had a “contract” to have a similar engagement with Sri Lankan security services, who have a questionable record regarding civil rights. While that contract appears to have been terminated due to the efforts of campaigners, the “contract” with Colombian security services still appears to be in place.”

“How can a fully publicly funded and accountable body, Police Scotland, have the authority, or autonomy, to decide to engage and contract with nation states of such highly questionably social and civil rights records and values?” demanded Tony, “We must lobby the Scottish Government to suspend these programmes until human rights abuses involving Colombian police are properly investigated and held to account.”