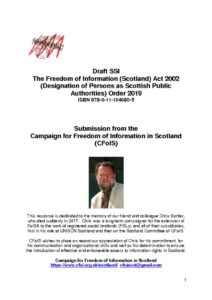 The Campaign for Freedom of Information in Scotland (CFoIS) has submitted evidence to the Scottish Parliament’s Local Government & Communities Committee for its meeting today, Wed 20 March.

The Committee is considering the draft Scottish Statutory Instrument on the designation of Registered Social Landlords (RSLs) and their subsidiaries under the Freedom of Information (Scotland) Act 2002 (FoISA)..

UNISON Scotland supports the submission and a letter from CFoIS to the Committee Convener, James Dornan, today. This calls on the Committee to require the Scottish Government to bring back an amended SSI which takes on the matters of concern raised in the submission.

In particular, we believes RSLs and all their subsidiaries should be designated under FoISA which is “An Act of the Scottish Parliament to make provision for the disclosure of information held by Scottish public authorities or by persons providing services for them; and for connected purposes.” However instead of simply designating RSLs and their subsidiaries, which enables a presumption of access to information unless one of the exemptions applies, the Scottish Government has deviated and adopted a complicated approach.

CFoIS believes the result of this approach is a draft SSI that lacks precision which will lead to inconsistencies in interpretation. We believe it is unacceptable to leave interpretation to the Scottish Information Commissioner as a reaction to people requesting a review under FoISA. Parliament should decide the precise purpose and scope of the SSI. The way forward is for the Local Government and Communities Committee to require the Scottish Government to amend the draft SSI and come back promptly with text which is acceptable . CFoIS still expects the latest promise of SSI implementation on 11th November 2019, to be honoured.

We believe it is possible for the Scottish Government to deliver an amended SSI within a short space of time and therefore the enforcement date of 11 November can remain.

Campaign for Freedom of Information in Scotland
www.cfoi.org.uk/scotland

(Keeping the implementation date is important given the long delays in delivering this. See our letter to Graeme Dey, Minister for Parliamentary Business, in November 2018. www.unison-scotland.org/anger-over-delays-to-freedom-of-information-rights-for-housing-association-tenants/ )

In the submission to today’s meeting, CFoIS paid tribute to former UNISON Scotland Communications Officer Chris Bartter. We are proud of the work Chris did with us and CFoIS to campaign for FOI laws to be extended to cover housing associations and all their subsidiaries. This is what the submission says about him:

“This response is dedicated to the memory of our friend and colleague Chris Bartter, who died suddenly in 2017. Chris was a long-term campaigner for the extension of FoISA to the work of registered social landlords (RSLs) and all of their subsidiaries, first in his role at UNISON Scotland and then on the Scotland Committee of CFoIS.

“CFoIS wishes to place on record our appreciation of Chris for his commitment, for his communication and organisational skills and well as his determination to ensure the introduction of effective and enforceable access to information rights in Scotland.”