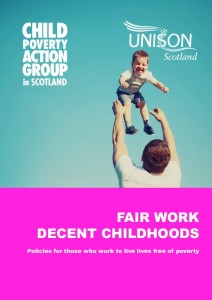 All political parties say work is the key driver for tackling poverty and we at UNISON Scotland and CPAG in Scotland agree work must be key to any anti-poverty strategy.
However work is not working for everyone. Six in 10 children who live in poverty have at least one parent in work. UNISON has evidence of public sector workers such as care workers who earn below the minimum wage, never mind a living wage. In some sectors like retail and care, low pay is endemic.

One in five of the workforce is earning less than the living wage including 39,000 workers delivering Scotland public services. CPAG in Scotland case evidence highlights how in-work poverty is undermining family life, damaging children and too often leaving families reliant on food banks.

The low paid have seen stagnating wages and high prices, especially for those on low incomes who face higher rates of inflation. We have seen the longest pay freeze since Victorian times. Local government workers, for example, have suffered a 17% real terms pay cut and the average worker is now almost £2000 a year worse off than in 2010.

At the same times we have seen an assault on our social security system and the support it provides to low income workers. Working families have been hit by cuts to working tax credits and childcare support, cuts to housing benefit, the under-occupancy charge ‘bedroom tax’, the freezing of child benefit and the breaking of the link between benefit uprating and inflation. Over £2 billion is estimated to have been cut from the annual value of the benefits and tax credits families in Scotland rely on, with over half of ‘welfare’ cuts coming out of working families pockets. The inevitable consequence is a child poverty crisis, with in-work child poverty already rising particularly sharply.

We therefore call on all parties to bring forward policies to ensure the next UK government helps those who work to live lives free of poverty.