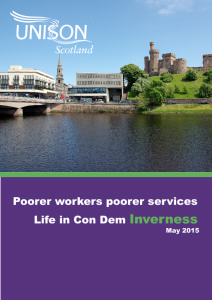 Over the last two years UNISON Scotland has compiled a number of reports into the living standards and working lives of our members who deliver Scotland’s. These have previously focussed on particular occupational groups, hospital porters , occupational therapists, housing staff, cleaners.

This report takes a different focus and is geographically based. For this report we have surveyed UNISON members in the Inverness area – specifically those members residing in the Inverness, Nairn, Badenoch and Strathspey constituency which has been represented by Danny Alexander, Liberal Democrat, Chief Secretary to the Treasury.

The results paint a bleak picture of declining standards – both living standards and in the quality of the services UNISON members are finding themselves able to deliver.

UNISON members are finding the standard of living under increasing pressure – at the same time as their jobs get more difficult through cuts to staffing and support. Across the constituency as a whole some 20.7% of workers do not earn the Living Wage.

Pay in public services has stagnated in recent years either frozen or markedly below inflation. This has meant for most people in public services that wages have gone down by at least 10%. Even with the welcome application of the Scottish Living Wage in some sectors many have seen real earnings fall to less than they were a few years ago.

If there has been any recovery under Mr Alexander’s Stewardship of the economy – it’s one which is passing his constituents by as many of them find life in and out of the workplace getting harder.

UNISON has outlined elsewhere our belief that for real economic recovery we will need wage led growth and investment in services. What is certain is that we need politicians in government whose ambitions and prospectus go beyond poorer workers delivering poorer services.