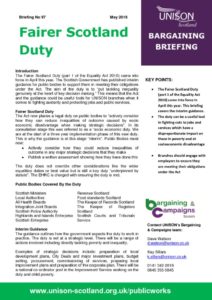 The Fairer Scotland Duty came into force in April this year. The Scottish government has published interim guidance for public bodies to support them in meeting their obligations under the Act. The aim of the duty is to “put tackling inequality genuinely at the heart of key decision making.” This means that the Act and the guidance could be useful tools for UNISON branches when it comes to fighting austerity and protecting jobs and public services.

The Act states that public bodies have a legal duty to have “due regard” and “actively consider how they can reduce inequalities of outcome” the guidance therefore gives more detail on what active consideration and due regard mean in practice. It also states that this is not a “tick box exercise”. It suggests that an appropriate officer must be involved in any assessment under the duty. The guidance also has a section on meeting the duty day-to-day, with a flow chart and some case studies with a before and after the duty outline.

UNISON is supportive of the principle of equality duties and in fighting for equality. Achieving change requires more than changing the law. To be successful the Act must be fully implemented and mainstreamed into the way decisions are made and public services are delivered. Rights are only rights if citizens are able to access those rights. UNISON has been disappointed in the way the previous duties have been implemented and is concerned that this new duty may be no more effective.

Branches have a key role to play in ensuring that their employers are meeting their responsibilities under the Fair Scotland Duty. Employers’ policies and plans should be checked to ensure that they have given “due regard” to this duty. Proposals for budget cuts and job losses in particular should be scrutinised with regard to their impact on those who are already socio-economically disadvantaged. If cuts are likely to push people into poverty or further increase their poverty then the duty offers an opportunity to challenge those decisions. The duty could also be useful in challenging privatisation and outsourcing.

As a first step branches should check that the proposal include equalities impact assessments checking the impact of the proposals on those with protected characteristics. (age, disability, gender, gender reassignment, pregnancy and maternity, race, religion or belief and sexual orientation as well as the fairer Scotland one)The duty to have due regard to the need to eliminate discrimination also covers marriage and civil partnerships in relation to employment issues.) If there has been no impact assessment then employers must undertake one before they can move forward. Branches can also challenge the quality of the impact assessment if they can identify issues that have not been identified in any assessments. So if services are closed deprived areas, and people on low incomes are expected to travel to access that service elsewhere, that has a clear impact on those who are already at a socio-economic disadvantage. Low pay for staff or attempts to change terms and conditions could also be challenged under the new duty if they have an impact on members who are at a socioeconomic disadvantage.

UNISON hopes that this duty will be more effective and urges branches to ensure that employers are fulfilling their obligations under the Act. It is collective bargaining by trade unions that will deliver real change.