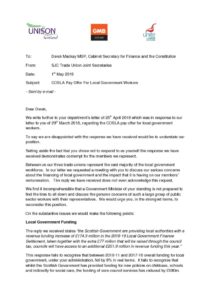 We are urging Derek Mackay to sit down and discuss the genuine concerns of such a large group of public sector workers with their representatives.

UNISON and other trade unions wrote to Derek Mackay MSP, Cabinet Secretary for Finance and the Constitution 29th March 2018, regarding the COSLA pay offer for local government workers. Derek Mackay replied to us on the 25th April 2018. This letter is our response. You can read more here

The three trade unions who signed this letter represent the vast majority of the local government workforce. We have requested a meeting to discuss our serious concerns about the financing of local government and the impact that it is having on our members’ remuneration.