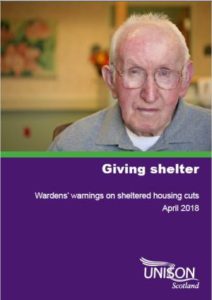 This is a survey of housing wardens sheltered housing officers, care support workers with a small number of people in other roles, e.g. cleaner, housing officer/manager, cook. All respondents are UNISON members

It is part of UNISON Scotland’s Damage series – a range of reports into the impact of austerity cuts on the delivery of public services.

This report looks at issues facing our members working in sheltered housing. Most respondents work for local authorities, with the rest employed by housing associations.

UNISON members were keen to speak out. It is obvious how hard they work and how much they care for their tenants: often giving their own time because they care for the tenants they are there to support. But they say they are struggling to have adequate time to spend with tenants and are worried about the changes and cuts that have taken place already and any more coming down the line.

This means there are longer periods where tenants rely on an alarm/call button type of “telecare” service.

Members also reported low morale. Member’s top concerns were financial cuts hitting the service in the next few years, increased workloads and “quality of service for tenants”.
And this made them concerned about the ability of their tenants to live independently.

90% of members who responded are worried about the impact of further cuts to hard-hit services in the next few years.

47% said there have already been major cuts, with another 14% reporting severe cuts.

80% of respondents said their work role had changed in recent years.

Members are concerned they are not getting to spend enough time with tenants, with resulting consequences for the wellbeing, health and safety of the elderly, often frail, people living in sheltered housing.

Too much paperwork/computer work in comparison with time spent with tenants. Members also highlighted worries around giving medication without sufficient training, about being vulnerable due to lone working, and about supporting the complex needs of some tenants.