The long running dispute around equal pay has continued even after the members were awarded a £500m settlement in 2019. 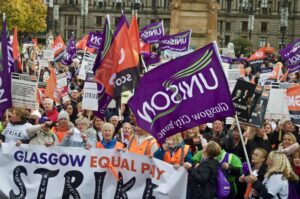 UNISON members at Glasgow City Council have voted in favour of strike action in an ongoing equal pay dispute.

The ballot comes as part of a long-running legal dispute with Glasgow City council around equal pay. In 2019, a £500m settlement was agreed with staff which settled pay claims up until March 2018 and included a new pay and grading system to rectify issues of unequal pay, primarily of women.

Since then, around 5,500 new claims have been lodged for the period prior to March 2018, with nearly 20,000 claimants waiting on settlements for the period after that.

The current dispute centres around whether the new claimants receive the terms of the 2019 agreement, while the council has recently said that it may not be able to finally settle its debt to these women until 2024, with no progress has been made on the issue of interim payments.

Speaking of the vote, regional organiser Mandy McDowall said: “The overwhelming vote for strike action really shows the strength of feeling from our members. They are so angry about this.

“While we welcome the council’s signals, this isn’t enough progress to resolve the dispute. The talks need to be more constructive, with no conditions and based on applying the 2019 deal to all valid claims and members simply cannot wait until 2024 for the claims to be paid out. Especially in the context of the cost-of-living crisis, members need and absolutely deserve an interim measure.

“We’ve worked really closely with the GMB, who have already voted in favour of strike action, and Unite, whose ballot returns on 14 March, and will continue to liaise with them in the next steps of the dispute.”

Speaking before the outcome of the strike ballot UNISON general secretary Christina McAnea said: “Women in Glasgow City Council have had promise after promise on equal pay and this saga has been going on for decades. Making women wait for many more years is not acceptable.

“This is a debt owed to women in the city and must be paid. If it was the other way round, the council would take no time at all in starting recovery action to recover debts owed to them. The case is undoubtedly complicated, but it is not fair to keep Glasgow women hanging on.”