The fate of two much-loved West College Scotland nurseries will be decided this week after weeks of campaigning to prevent their closure.

West College first announced the closure of the nurseries before the Christmas break and trade unions, parents, political representatives and local communities have been battling to reverse the decision ever since.

The ‘lifeline’ nurseries have provided a vital service to their local communities for decades.

Lorcan Mullen, UNISON Scotland’s head of higher and further education, said: “UNISON and UNITE are supporting the families and dedicated early years workers in their fight to save these much-loved nurseries, and this week is when college management will decide their fate.

“The college has repeatedly called the nurseries loss-making, but it is normal for support services in the education sector to be cross-subsidised by income from teaching and commercial activity.

“At our recent demonstrations in Paisley and Greenock, we heard moving accounts from multiple generations of student parents who could not have returned to education without these nurseries. We heard from passionate early years professionals desperate to keep doing the job they love, in services with a proud track record.

“We urge Liz Connolly and her team to stand by their workforce, parents and students, and do the right thing – save these vital services from closure.”

• UNISON and UNITE secured a collective consultation period which allowed time for the staff affected to put forward viable alternatives which would allow the nurseries to remain open. These proposals, which provide the college with a range of options for increasing income and productivity have been shared with management and the college will make its decision on Wednesday (March 9). 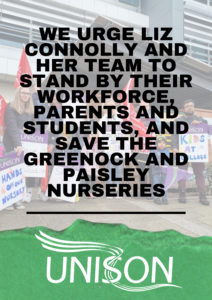