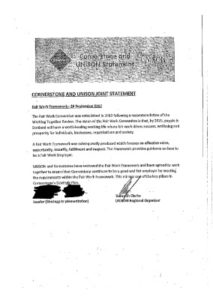 Cornerstone UNISON members will remember that we are sharing some of the agreements that have been reached with Cornerstone in recent times, with an explanation of what they mean for our members.

The pillars of the framework are:- Effective Voice, Opportunity, Security, Fulfilment, and Respect.

The Scottish Government very clearly states that all good employers should aim to meet the standards within the Framework, and that this is good for workers, good for business, and good for Scotland. UNISON very firmly endorses this view.

It does however beg the question that during a period of significant change, such as the Local Cornerstone Project, why an employer would want to limit our involvement?

UNISON is clear that the Testing of Self Organised Teams agreement (released by us last week) went some way to counter the problems found during the failed Craigewan Pilot. Discarding those lessons, and the trade union along with them, would be folly.