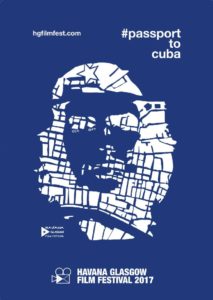 UNISON is proud to promote the Havana Glasgow Film Festival running from 9 – 12 November 2017. Our involvement in the Festival was through our friend, comrade and former colleague Chris Bartter. For those of you who are not aware, tragically Chris died suddenly on Saturday 28 October. This was a tremendous shock to us all. (See The Herald report on his death.) Our thoughts are with his partner Doreen.

Chris was a towering figure in our movement in all senses. He always championed the role arts could play in our struggles and in the enrichment of all our lives. He was of course a creative artist himself, designing and publishing countless resources that we could all use to fight for our members. Chris was an internationalist. He and Doreen had seen a lot of the world and he knew the fight for social justice was global. His current activity clearly demonstrates this. As well as his promotion of the Havana Glasgow Film Festival, Chris was centrally involved in the Nelson Mandela Scottish Memorial Foundation which has just launched an appeal to raise funds for a statue of Nelson Mandela in Glasgow.

The festival has a great selection of films and UNISON is associated with the screening of From Ghost Town to Havana at 7.15pm at the CCA, Glasgow, on Friday 10 November. Ghost Town to Havana is a heartbreaking, funny, and inspirational story about mentorship, life, love, murder, kids and baseball in Oakland and Havana today.

Please do spread the word as widely as possible to help build a good audience for this important film festival.