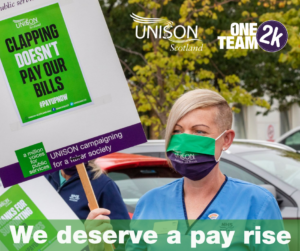 Scotland’s health trade unions have written to the Cabinet Secretary for Health and Sport outlining their anger and disappointment at the process that led to last week’s announcement on NHS pay.

The announcement was made without prior notice or warning to the health trade unions.

The Scottish Government claimed, as far back as November, that the early stages of negotiating a new pay deal for NHS Agenda for Change staff were underway. The lack of progress on pay negotiations for 2021/22 led to representatives from the health trade unions who sit on the Scottish Terms and Conditions Committee (STAC) raising their disappointment with the Cabinet Secretary for Health and Sport, Jeane Freeman MSP, in a letter on 1st  February 2020 .  In this letter the staff side rejected the suggestion of a ‘payment on account’ and reiterated their willingness to enter into negotiations and requested an immediate start to formal pay talks.

In today’s (Tuesday) letter to the Cabinet Secretary, the NHS trade unions highlighted the negative impact of last week’s announcement on the long-standing positive partnership between NHS Scotland and the trade unions representing staff on Agenda for Change contracts.

It states that there is a “significant breakdown in the trust and respect between the Scottish Government and the health trade unions.”

Colin Poolman, chair of STAC and Royal College of Nursing Scotland senior officer, said: “For months now we’ve been told that that the Scottish Government will do its best to give NHS staff the pay increase they deserve. Last week’s announcement that NHS staff on Agenda for Change will have to wait until the summer for negotiations to commence is unacceptable, even more so when you consider the efforts and sacrifices that they have made over the past year to keep the country safe.”

Willie Duffy, staffside secretary of STAC and UNISON regional organiser, said: “We have worked hard to foster a positive relationship with government, one which we thought was built on mutual trust for the benefit of patients and NHS staff. The process that led to last week’s announcement has raised serious questions about the future of this relationship.

“We are requesting the decision to delay the beginning of negotiations until the summer be reviewed immediately. If the Scottish Government is not in a position to do this, then the Cabinet Secretary needs to advise the trade unions now so we can consult our members on the next steps.”

You can read the full letter here.

To speak to Colin Poolman, Staff side Chair of STAC, please contact the RCN Scotland press office on 0131 662 6173 or press.scot@rcn.org.uk.