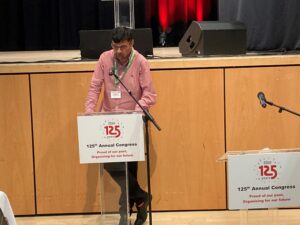 #STUC22 The humanitarian catastrophe in Afghanistan demands urgent action from the UK government, Congress agreed. Delegates called on the Scottish and UK governments to open up safe legal routes for refugees to come to the UK and for more effective resettlement support.

The University and College Union motion said that protecting and promoting the rights of women and girls is a global priority and should be a central focus for the UK’s foreign policy and aid spending.

Seconding the motion, Zia Hussain said that political and military decisions by US and UK governments have paved the way for the return of the Taliban and economic collapse. He noted that Afghanistan was already one of the most dangerous places on Earth to be female and now, month by month, the Taliban are removing women’s most basic human rights.

Turning to asylum policy, Zia warned, “The Tory Nationality and Borders Bill will punish the most desperate Afghan refugees trying to reach the UK and treat them like criminals,” adding,” the UK government’s latest proposal to process asylum applications in Rwanda is unspeakably offensive.”

“UNISON has urged the government to fund targeted support for women and girls and the promotion of human and labour rights, by restoring aid that was recently cut. We have also called for Afghan asylum seekers to be given refuge in our communities here in the UK, and for MPs from all parties to defeat the government’s cruel and inhumane plans for refugees and asylum seekers.”