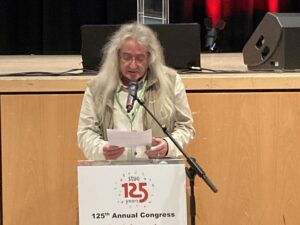 #STUC22 Congress voted to join an international trade union campaign during the 2022 World Cup Finals to demand health and safety laws and full trade union rights for migrant workers in Qatar. It condemned the deaths of more than 6,500 workers mostly from India, Pakistan, Nepal and Sri Lanka in the rush to construct stadia and infrastructure for the competition.

Supporting the motion, Tony Caleary spoke about UNISON’s project on the ground in Qatar which supports the education and organisation of Philippine migrant workers. Since 2018 the union has been working with the Building and Wood Workers’ International movement, now recognised by the Qatari Government as the legitimate representative of migrant construction workers.

“This has led to a number of gains,” said Tony, “the end of the Kafala system, the creation of a Workers’ Support and Insurance Fund, and a system for settling labour disputes. In March 2021, a non-discriminatory minimum wage was introduced across all sectors in Qatar.”

“UNISON’s project runs until the end of 2022, but we know it takes a long time for new institutions to become effective and for workplace culture to genuinely change.”

Tony said, “Our fellow migrant workers are asking us to focus on helping them sustain the gains they have made. They’ve asked us to campaign and advocate for the legacy of the games to be a permanent migrant workers’ centre: somewhere safe; somewhere to learn about their rights; somewhere they can go to resolve their problems at work.”

“Rather than a boycott perhaps we can convince the Scottish FA to add their voice loud and clear in calling for the migrant workers centre.”