This year’s conference highlighted the impact on women on many of the issues facing society today, both in the workplace and more widely – low pay, spiralling cost of living, sexual harassment, domestic violence, discrimination in the workplace and women’s health issues.

Delegates heard harrowing stories of how the rising costs of food and fuel is impacting on our members; of how women are going without food to feed their children; of how communities are having to now provide “warm hubs” for families who cannot afford to heat their homes.

We heard about how women bear the brunt of the cost of living crisis. They are in jobs that are historically underpaid and undervalued. The gender pay gap is alive and kicking.

Women are also the main victims of sexual harassment and violence, including domestic violence, perpetrated predominantly by men.

We heard many personal stories from women about their own experiences of dealing with periods, the menopause and other health issues like endometriosis. It was refreshing to lift the lid on these issues as topics for open discussion – and end the silence and shame that has surrounded these issues for too many years.

We also heard a powerful debate on abortion rights, with conference echoing Maree Todd, Scottish Minister, in making a strong commitment to fight for women in Scotland and all over the world to have a right to an accessible, safe and legal abortion.

As always Women’s Conference was a welcoming and accepting environment. However there was a strong undercurrent of anger in both the debates and from the guest speakers at the attacks on women both politically and personally. And a shared determination for collective action to demand better.

One of the highlights was the presentations from three pupils from Grove Academy as part of the Unions into Schools programme, and from the vice chair of the Scottish Youth Parliament. Fascinating, beautifully researched and insightful, these young women gave us high hopes for achieving gender equality in the future.

Pay rises – good for women, good for the economy
Conference backed UNISON’s call for the Women’s committee to use its influence and profile to highlight the pay campaigns which affect our women trade union members; and to lobby the Scottish Government to take substantial action on tackling the gender pay gap.

Moving the motion, Kate Ramsden warned that many people won’t survive a winter with rocketing energy and food costs.

“And it’s ordinary people who are suffering,” said Kate. “We are still the sixth richest country in the world. The money is there – it’s just that over the past 12 years of a Tory government, there has been a mass transfer of wealth from all of us to the richest.”

She added that the huge irony of the current crisis is that it is the very people who got this country through the pandemic that are suffering now, the majority of whom are women.

She pointed to the Tories stated aim of growth in the economy and pointed out that the way to create growth is not to cut taxes or to make more cuts to public services.

“That’s all been tried and it hasn’t worked,” slammed Kate, telling delegates that the answer is to put more money in the pockets of ordinary people.

She called for decent above inflation pay rises for workers – especially women workers – and increased benefits, “instead of putting money in the pockets of rich shareholders and the obscenely wealthy, who squirrel it away in off shore accounts.

“It’s not just morally right to make sure that these jobs are paid decently, and that our members can survive this cost of living crisis.

“It’s absolutely essential to grow our economy. It’s a win-win. We need to get that message out there at every opportunity and change the Tories’ self-seeking narrative.”

Workplace supports essential for domestic violence survivors
Conference went on to highlight the barriers that face women who experience domestic violence created by the cost of living crisis, just as they are facing escalating abuse.

Delegates supported UNISON’s call for the Women’s Committee to press for an Emergency Domestic Abuse Fund to support survivors to pay for essential items and energy costs; and for a statutory right to paid leave for those experiencing domestic abuse.

Moving the motion, UNISON’s Grace Hepburn said that domestic abuse is both a personal issue and a workplace issue, and its impact can be profound and far-reaching.

“We need to make sure that when they do, that support is there.  Employers, in their duty of care, need to be prepared for this to happen and should have in place appropriate support measures to help anyone who comes forward – such as workplace policies and recognition of domestic abuse as a H&S and welfare issue,” she urged.

She spoke of how the cost of living crisis is negatively impacting those suffering domestic abuse even more.

“Previously 90% of women suffering domestic abuse reported economic abuse, now we have to wonder, is that figure even higher?” questioned Grace

“This is why we are calling for an emergency domestic abuse fund and statutory right to paid leave for women experiencing abuse.

“Let us not forget that, according to the femicide census, over 50 women are killed by their partners every year,” said Grace, calling for action now.

Unions at forefront of fight for gender pay justice
STUC Women’s Conference condemned the impact of the COVID pandemic on women’s equality. The UN Women’s data report in 2020 estimated women’s equality to be at risk of being set back 25 years due to the pandemic, and conference reaffirmed its commitment to improving women’s working conditions and to combatting this rollback.

“It has taken a decade for the gender pay gap to fall to approximately a quarter amongst both full-time and part-time employees. This is simply not fast enough and more needs to be done,” urged Susan, calling for trade unions to continue to raise the issue and be the voice for women in the workplace.

Speaking on behalf of the STUC Women’s Committee, UNISON’s Davena Rankin told conference that the Institute for Employment Studies carried out research that concluded that low-income workers are bearing the brunt of the Coronavirus pandemic: and that these workers were more likely to be women, to be lone parents, to be from certain ethnic minority groups (Black, Pakistani or Bangladeshi).

Of the 490,000 jobs covered by their research in 2020, ninety percent of these jobs were part time roles, overwhelmingly carried out by women, the majority of whom had been forced into “economic inactivity” highlighting the disproportionate impact on women.

Davena called for louder, clearer leadership on the gender pay gap from the Scottish Government and targets that have real consequences if not met; for legislative changes to enhance parental and carer’s leave and a right to work flexibly; for reliable and affordable public transport and for publicly funded and publicly provided childcare delivered by well trained and well paid staff.

Davena added that as well on calling on the Scottish Government to do more, we must also call on our unions to do more, both in tackling their pay gaps as employers and ensuring that ending the gender pay gap is at the heart of all industrial strategies.

“In 2019, the Scottish Government published A fairer Scotland for women: gender pay gap action plan. We need the fine words outlined in this plan translated into real action if we are to deliver gender pay justice for women workers.”

Call to fix maternity staff shortages
Delegates heard that the pressures on the NHS with overstretched staff, staff shortages and a recruitment and retention crisis is also reflected in midwifery, and the STUC Women’s Committee will lobby the Government to take urgent measures to improve the retention and recruitment of midwives and protect safety in maternity services by keeping midwives in midwifery. 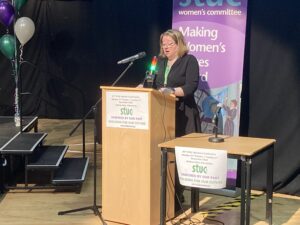 This will include a call from UNISON for to find ways to enable support workers in maternity services to become registered midwives. Seconding the Royal College of Midwifes’ motion, Katrina Murray told conference that the biggest issue in healthcare at the moment is the lack of registered staff.

“Staff are leaving at a rate that can’t be met by newly qualified graduates and we all know that we need a mix of experienced and newly qualified staff,” warned Katrina.

“We have many, highly skilled and experienced Healthcare and Maternity Care assistants who simply can’t afford to leave their jobs to go and study full time to take the next step in their careers.

We need to talk about menstruation and menopause

Women’s health was high on the agenda, and conference demanded a much better recognition of the impact on women of menstruation, the menopause and other women’s health issues. It called for action in the workplace to educate managers on reasonable adjustments, to campaign for a menopause policy in all workplaces, and for further government funding to investigate women’s health.

Supporting the wide-ranging composite from Unite, Community and NASUWT, UNISON’s Grace Hepburn spoke of her experience of trying to introduce a menopause policy to a white, male, middle-aged managerial team, who dealt with their discomfort by cracking old, tired jokes.

“Well they’re not laughing now,” said Grace, describing how the menopause policy she co-authored has been rolled out to every FE college in Scotland subject to national bargaining.

She urged delegates to “challenge poor attitudes from employers and put women’s health firmly on the agenda.”