Public services are the top issue for the vast majority of Scottish voters.

We are publishing a full scale poll, undertaken by Survation for UNISON Scotland, that asked voters to tell us their priorities for the local government elections. Public services were the top priority followed by the economy and job security. 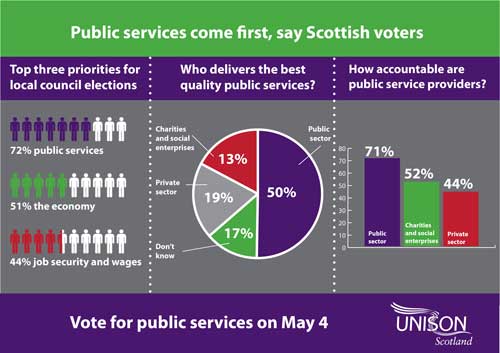 The results were clear over 70% of those who took part place public services as one of the three most important issues facing them and their families ahead of the upcoming election. The economy was second chosen by just over fifty percent (51%) of respondents and job security and availability came in third with 40%. There was very little variation when results were broken down by party affiliation with public services coming highest among all party voters. Jobs came second for SNP voters while the economy was second for Conservative voters equal numbers of Labour voters picked jobs and the economy.

Voters were also clear about whom they believe delivers the best quality services. Half of all voters chose public sector organisations with only 19% supporting the private sector and even fewer (13%) choosing charities. Even amongst Conservative voters only 31% picked the private sector and 10% charities. UNISON hopes that candidates from all parties are now clear that the people of Scotland want high quality publically delivered services. 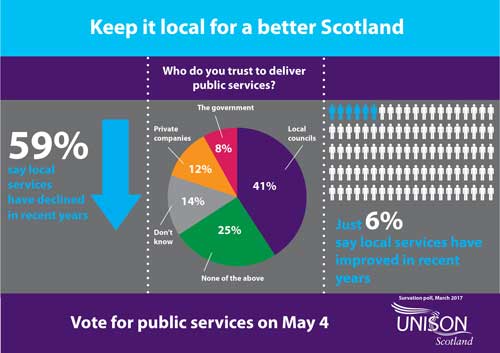 Trust and accountability are important issues in a democracy. The polling figures indicate that people trust publically delivered services and believe them to be more accountable than private of charitable delivery: 71% of respondents believed public sector organisations are accountable for the services they deliver while for charities and the private sector the scores were 52% and 44%. Our survey reveals low levels of trust towards politicians and the media. Only 27% of respondents stated that they trust Holyrood politicians as sources of information about public services and 42% stated that they distrusted them. Only 20% trust the media with 47% stating that they distrust the media. Trade unions remain a relatively trusted source of information with 32% only topped by “friends and family” and academics. Friends and family are by far the most trusted source of information on public services (72%), academics achieved 56%. Academics were only distrusted by 11% of respondents. 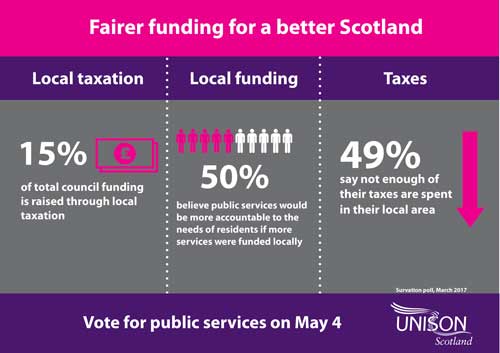 Budget cuts are having a serious impact on local services: only 6% of respondents believed that services have improved in recent years and a further 30% that they had stayed the same while 59% felt they had declined. When asked where they blame lay 26% blamed local councils, 35% the government and 36% blamed both. SNP voters were the least likely to blame council alone but even then it was still 23%, with 36% of Conservative voters blaming the council and 30% of Labour voters. Nearly half of respondents want more of their taxes to be spent in their local areas and councils were the body most trusted to deliver local services with 41% picking the council and only 8% the government and 12% private companies. The poll summary is available here and tables here.