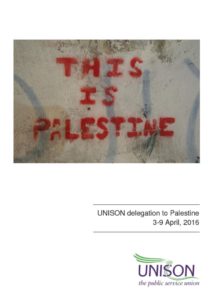 UNISON Scotland’s International Committee has condemned the Trump administration’s decision to officially recognise Jerusalem as the capital of Israel in contravention of United Nations resolutions.

UNISON Scotland has long been part of the campaign for the right of the Palestinian people to self-determination, to live free from occupation and repression and to have the right to return to their homeland in line with the Oslo Accord between Palestinian and Israeli leaders.

The Oslo Accord, based on United Nations Security Council Resolutions 242 and 338, recognised that any agreement on the status of Jerusalem, an important city historically for many faiths, has to be an integral part of the peace process. This irresponsible act by the Trump administration undermines what slim hopes there were for that peace process, risks turmoil in the region and around the world and could be responsible for otherwise avoidable bloodshed.

UNISON has links with and has resourced projects promoted by B’Tselem, the Israeli Information Center for Human Rights in the Occupied Territories. It works to end Israel’s occupation in acknowledgment of the fact that ending the occupation regime is the only way to forge a future in which human rights, democracy, liberty and equality are ensured to all persons living between the Jordan River and the Mediterranean Sea. Read more here.

Its statement says: “Since annexing East Jerusalem unlawfully in 1967, Israel has never recognized the rights of Palestinians who live there nor treated them as equals. Trump’s announcement does not change the fact a large part of Jerusalem is occupied territory, in which residents are deprived of political rights. This is the reality that must change.”

UNISON policy, agreed at its National Conference, includes the following

1) Campaign for the repeal of restrictive laws which seek to silence those who campaign for Palestinian rights;

2) Continue to campaign for an end to the illegal occupation of East Jerusalem and the West Bank and the blockade of Gaza;

4) To encourage all UNISON branches to affiliate to the Palestine Solidarity Campaign;

5) Pursue the policies and strategy already decided upon at last year’s National Delegate Conference, with particular reference to positive BDS campaigning, and in supporting the continued struggle to secure the Rights and Aspirations of the Palestinian People.