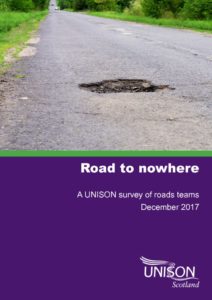 The workforce reported that they struggle to manage budget cuts, sometimes severe budget cuts, and as a consequence Scotland’s road network deteriorating. They are suffering job losses, and ageing workforce, difficulty recruiting, low morale at a time when our roads are under increasing pressures.

While trunk roads are the responsibility of Transport Scotland and the remainder of our roads are the responsibility of local authorities. The roads teams cover roads maintenance, traffic management and lighting. Some roads team work across more than one local authority or department. The roads staff who responded to our survey hold a range of jobs including road workers, engineers, technicians, team leaders and managers. This is a highly qualified workforce. Respondents hold a range of qualification including HNDs, degrees, master and charter degrees and a range of qualifications like SVQs in roads maintenance, winter maintenance and HGV licences.

The pressure on Scotland’s road network include, that substantial cuts have already taken place and they will continue to be cut until 2021.

The report’s main findings are:
• Council’s are being forced to opt for short-term cheaper fixes that store up expensive problems for the future.
• UNISON have indentified 296 job vacancies in road teams across Scotland. Councils report difficulty recruiting workers who can get better pay elsewhere.
• Road team’s are overworked and underpaid. They have suffered a decade of pay cuts. Demand for road repairs is increasing. The majority are skip breaks or work late to get work done. 9 in 10 say they feel under-valued and that morale in the roads teams workforce is low or very low.
• Budget cuts mean that fewer young people are coming into the workforce storing up problems for the future.

Dave Watson, UNISON head of policy and public affairs, said: “The simple truth is that there is just too much work to do with too few staff. Road use in Scotland is increasing, we need to meet our climate change targets and improve air quality. This is not the time to cut back on road workers.

And we are storing up real problems for the future. Quick fixes mean roads will need more expensive repairs in years to come. We are losing workers with high quality skills and experience and not replacing them, and the workforce is getting older with less young people joining road teams. A decent road network is crucial to Scotland’s businesses and public services. It is vital that we jhave a well maintained roads network.

What road team staff say:
“Budgets are being cut year on year. Understandably services like Education and Social Care Budgets are being loaded first, however if the roads are left to deteriorate at the current levels there will be a huge bill to repair them and someone will have to pay.”
“Everyone [is] frustrated that we cannot provide the same level of service as we used to do, due to continues staff cuts.”
“Far too much to do, not enough time, insufficient management and political support”.
“I now accept that I am unable to complete everything so have to prioritise certain things to the detriment of others.”
“I used to regularly work through lunchtimes and work later after hours in the evening, but I have stopped doing this are reducing topped as it has been affecting my health.”
We no longer carry out large scale projects due to lack of resources. This is now contracted out to consultants when required which costs more and has a negative impact on our budgets. We also do not make significant improvements to our roads assets anymore and tend to maintain the condition to an acceptable level. We are now noticing that the overall condition of our assets
Far too many job requirements and not enough time to actually complete complex tasks.
Half the staff double the work!
The work of eight people is now being carried out by six
It is no exaggeration to say my own workload has doubled in the last few years covering new areas emerging from within current work areas and also the responsibilities that were left following staff reductions

THIS IS THE PRINT VERSION OF THE REPORT. The colours may look faded online, but will print properly 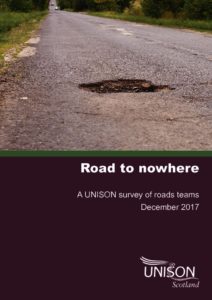