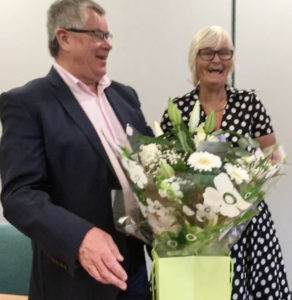 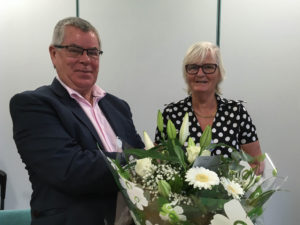 Joan Lewis (above), UNISON activist, was thanked for her service to UNISON by Mike Kirby, UNISON Scottish Secretary. Joan has been a NUPE and UNISON member for 49 ½ years.

Mike and Joan shared a joke about how UNISON had (and had not) changed over the years. Mike said that ‘UNISON could not do everything it does without the commitment of activists like Joan, her contribution has been immense, it speaks for itself.’

Joan told Mike and Deborah Clark, Regional Organiser for community and voluntary sector, that she had loved representing members. She joked about catching the early train to Aberdeen to represent a member and having to catch the quarter past midnight train to get home.

Deborah said Joan was well known for her commitment and for making trade union phone-calls even when she was on leave.

Joan’s other passion was health and safety at work. Joan understood the importance of health and safety to improving the lives of workers. Joan studied hard to achieve the accolade of being a chartered member of the Institution of Occupational Safety and Health which is UK’s biggest organisation for health and safety professionals.

Joan’s trade union career started at the Timpo Toy factory, there was a pay and hours dispute. Joan stepped forward. And that kicked off 49 and half years as a trade union activist.

Joan went on to be a trainee nurse at Law hospital; a lollipop lady with North Lanarkshire Council while her children were small; a care worker at Murdaston Castle, then with North Lanarkshire Council. In the latter part of her career Joan was a carer with the Richmond Fellowship for five years and carer with Capability Scotland for almost 13 years. She remained a trade union activists throughout.

She held roles such as branch secretary, health and safety officer, education officer, service conditions officer, service group representative and for the last three years has been on the Standing Orders Committee for the Community National Executive.

Joan is retiring to Malta with her partner George: ‘It’s not a place we have any family history with, we went on holiday and loved it, so we decided to retire there’. Everyone in UNISON wishes her and George a long and active retirement.