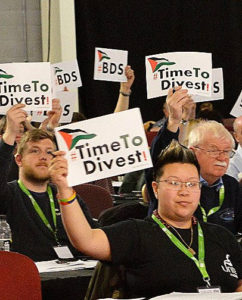 The Scottish pension fund which manages £2.3 billion in the pension funds for Falkirk, Stirling and Clackmannanshire councils, sold off its £6m holding in Bank Hapoalim following an assessment by the fund manger that concluded the political and reputational risks associated with Israeli Bank Hapoalim were significant.

Its worth noting that both Lothian and Tayside pension funds still hold stock in Bank Hapoalim.

The international committee would wish to thank Falkirk and Clackmannanshire UNISON members and activists for all their great work. Please keep up the work and hopefully other councils will take note of Falkirk’s excellent stance.

The details of Time to Divest are here. https://unison-scotland.org/boycott-disinvestment-and-sanctions-pensions/