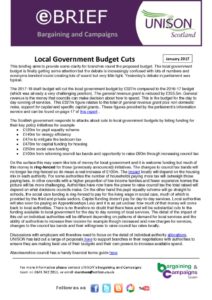 This briefing aims to provide some clarity for branches round the proposed budget. The local government budget is finally getting some attention but the debate is increasingly confused with lots of numbers and acronyms bandied round creating lots of sound but very little light. Yesterday’s debate in parliament was typical.

The 2017-18 draft budget will cut the local government budget by £327m compared to the 2016-17 budget (which was already a very challenging position). The general revenue grant is reduced by £355.5m .General revenue is the money that councils can make decision about how to spend. This is the budget for the day to day running of services.  This £327m figure relates to the total of general revenue grant plus non domestic rates, support for capital and specific capital grants.. These figures provided by the parliament’s information service and can be found on page 17 of this report .

On the surface this may seem like lots of money for local government and it is welcome funding but much of this money is ring-fenced for those (previously announced) initiatives. The changes to council tax bands will no longer be ring-fenced so do mean a real increase of £100m. The impact locally will depend on the housing mix in each authority. For some authorities the number of households paying more tax will outweigh those paying less. In other councils with a higher proportion of low income families and fewer expensive homes the picture will be more challenging. Authorities have now have the power to raise council tax the total raised will depend on what decisions councils make. On the other hand the pupil equality scheme will go straight to schools, the social care funding is ring-fenced to pay for the living wage in social care, much of which is provided by the third and private sectors. Capital funding doesn’t pay for day-to-day services. Local authorities will also soon be paying an Apprenticeships Levy and it is as yet unclear how much of that money will come back to local authorities. There is no therefore no doubt that there have and will be substantial cuts to the funding available to local government for the day to day running of local services. The detail of the impact of this cut on individual authorities will be different depending on patterns of demand for local services and the ability of authorities to increase their income for example though increased and new charges for services, changes to the council tax bands and their willingness to raise council tax rates locally.

Discussions with employers will therefore need to focus on the detail of individual authority allocations. UNISON has laid out a range of proposals here to support branches in their negotiations with authorities to ensure they are making best use of their budgets and their own powers to increase available spend.