For fairness and democracy: keep it local 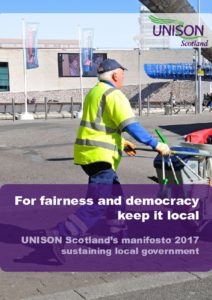 Launched at UNISON Scottish council on Saturday 1 April 2017 this is the UNISON Scotland manifesto for the local government elections on 4 May 2017.

Our manifesto calls for sustainable funding for local government, so it can take meaningful accountable decisions which can make a real difference to local needs. Rather than just protecting local services.

Local government have borne the brunt of austerity and this must stop. The next round of cuts will be even worse for local government with more jobs and service cuts planned. A staggering 91% of public sector jobs losses in Scotland since the crash have been in local government. That’s 30,000 jobs cut in Scottish local government since 2009.

UNISON welcomes the end of the council tax freeze and calls on councils to actively explore a comprehensive programme of refinancing which could save billions across Scotland.

UNISON manifesto also calls for:  planned expansion in early years to be delivered by the public sector as it is the most cost effective way forward; investment in social care with direct monitoring of care services and sufficient weighting to fair work in contracts and adoption with UNISON Ethical Care Charter; protection of social work budgets; a massive social housing programme; creating jobs to refurbish housing stock and do something about the 940,000 homes in Scotland; investment in library services and facilities.