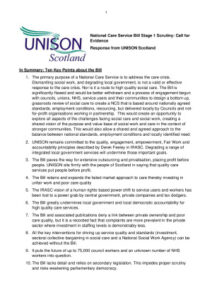 UNISON has submitted its Evidence to the Scottish Parliament’s call for views on The National Care Service (Scotland) Bill.

UNISON is quite clear that the Bill is unfit for purpose and should be withdrawn.

The Bill will leave care provided as a for profit service, will mean the outsourcing of tens of thousands of council workers’ jobs – and mean that the that the most personal services relied on by the most vulnerable adults and children in Scotland will be the subject of contracting and procurement exercises.

The Bill gives the Scottish Government the power to transfer functions and property out of councils and the NHS whenever it sees fit. This is a massively centralising move – if the Bill goes ahead as planned “it deals a fatal blow to local government”.

In addition, the Bill lacks crucial elements of detail in so many areas that the government is denying Parliament the opportunity to carry out meaningful scrutiny of legislation.