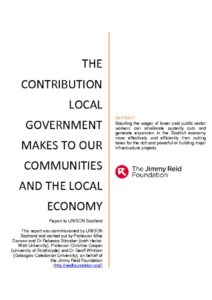 As agreeing the Scottish Government Budget for 2018/2019 reaches a critical stage, UNISON has commisioned a new report from the Jimmy Reid Foundation: The contribution local government makes to our communities and the local economy.

With funding for local government in the proposed Scottish Budget viewed as inadequate by many and with the Scottish Green Party again making its support for the Budget dependent upon some £150m extra funding for local councils, the report identified and analyses the economic and social rationales for the public sector delivering services and owning assets collectively on behalf of communities and society.

The report argues that effective and efficient delivery is dependent on suitably and fairly rewarded staff, especially as recovery from recession and supporting the most vulnerable relies on this workforce. To this end, it demonstrates that the UK Government-imposed 1% cap on public sector pay increases has distorted labour markets, is unfair on those delivering essential public services, and has impacted on the ability of public sector employers to retain and attract staff.

The Scottish Government Draft Budget for 2018-2019 offers a total core funding package of £10.51 billion for local government. While this would protect much local government day-to-day spending for local services in cash terms it would still, given OBR forecasts of inflation, mean a cut in real terms. The consequences of this are likely to be further cuts to employment and service provision levels and the inability to fund the Scottish Government’s own policy on public sector pay, namely, a 3% pay rise for all earning less than £30,000 and a 2% rise for those earning more than £30,000.

The net costs to the Scottish and UK budgets of fully funding the inclusion of local government workers in the Scottish Public Sector Pay Policy would be about £45m. The report shows the costs to the Scottish Budget would be higher but incomes and gross value added (GVA) would be about £70m greater. Indeed, the rationale of doing so is highlighted by arguing equivalent tax cuts for higher income groups would generate lower gross benefits overall, lead to further austerity cuts and in net terms lead to reductions in demand for local enterprises with job losses and further falls in incomes. By contrast, redistributing incomes towards lower paid workers and more innovative public procurement can deliver an expansion of the Scottish economy, ameliorating some austerity cuts.

Turning to employment levels, the report shows that with employment and services protected in health and education, local government has borne the brunt (nine out of ten) of austerity job losses in Scotland. Many of these jobs have been contracted out, converted into self-employment as well as disappearing, with impacts on services and lower paid workers.

Pen-ultimately, the report argues that public expenditure in the form of local authority funding is crucial to sustain and grow economic and social benefits to local communities and society in Scotland as a whole.

Finally, the report demonstrates that analyses of public procurement and economic impacts of different forms of public sector expenditure confirm that economic expansion could be generated more effectively and efficiently within a balanced budget through more creative and innovative approaches to social, community and economic development (see chapter on ‘Innovation in Local Government Support for Local Economies’).

UNISON Scotland Head of Policy & Public Affairs, Dave Watson said: ‘This report is a timely analysis of the positive social and economic impact councils have on the local economy. Cuts to local government not only damage local services, but they also undermine economic growth’.

Professor Gregor Gall, director of the Jimmy Reid Foundation, welcomed the report saying: ‘Local government has become the poor relation of the public sector in Scotland. Its workers have suffered continual job losses and real term pay cuts. This Scottish Budget, with the new tax raising powers available to the Scottish Government, is a big opportunity for the SNP to make good on its claim to be a left-of-centre social democratic party. Claiming to be so dictates that local government is now properly funded for its jobs, workers’ pay levels and services to the public. This report gives the SNP all the arguments and evidence it will ever need to take this important step’.

1) The report was commissioned by UNISON Scotland and carried out by Professor Mike Danson and Dr Rebecca Stirzaker (both Heriot-Watt University), Professor Christine Cooper (University of Strathclyde) and Dr Geoff Whittam (Glasgow Caledonian University), on behalf of the Jimmy Reid Foundation (http://reidfoundation.org/)
2) The Jimmy Reid Foundation was established in 2011, on the first anniversary of his death. The majority of unions in Scotland are affiliated to the Foundation.