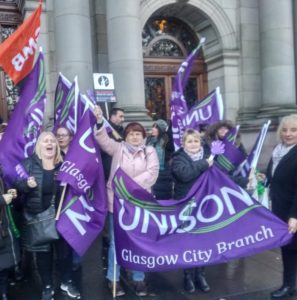 Glasgow City Council’s City Administration Committee voted today (Wednesday) not to appeal to the Supreme Court in the long running equal pay cases brought by thousands of council employees. The mainly women claimants have been pursuing the council for equal pay since the council introduced its current pay and grading system in 2007 and Action4Equality have modelled a projected cost of £500m. Whatever the actual cost, that bill must now be paid.

Commenting on the decision, chair of UNISON’s Glasgow City branch Carol Ball, said:
“This is a great day for the low paid cleaners, carers, caterers and others working for Glasgow City Council who have waited ten years for pay equality. A great day, but just the first day in the process of moving to equality – because settlement takes time.

“Our members have waited long enough for the fair and equal pay they have worked hard for and deserve. People may be shocked by the Action4Equality projection of £500m but we ask folk to bear in mind – this is the impact of discrimination. It’s not the lifetime cost of pay inequality, just a ten year slice into that injustice. And that injustice ends now.”

Amanda Green, UNISON member and a home carer, said: “It’s been a long and difficult struggle to get Glasgow City Council to finally commit to treating women fairly. We work hard to deliver the services the people of Glasgow rely on and all we are asking is for women to be valued and treated equally.”

UNISON Scotland’s regional manager Peter Hunter said: “We are pleased that the new leadership at Glasgow City Council has accepted the equality challenge and committed the resources and expertise of the council to a process that finally accepts its responsibility to treat women fairly and compensates for losses of the past.

“The Accounts Commission berated other councils last year for piling up £750m of discrimination debts by not having their eye on the ball. That’s not the position in Glasgow now. By confronting the challenge of inequality the new administration has opened the issue up to intense scrutiny.

“Every councillor now knows what was hidden in the past – there is pay discrimination in this council, it needs to stop, and it stops now. Full credit to Councillor Aitken for forcing what has been a robust debate. The challenge is to maintain that standard of governance in the months and years ahead. Discrimination never sleeps, so there is no place for complacent governance. The women of Glasgow are awake and alert to their rights – wide awake.”