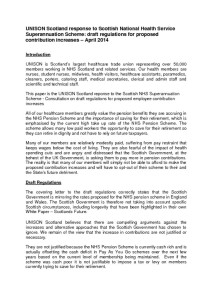 All of our healthcare members greatly value the pension benefits they are accruing in the NHS Pension Scheme and the importance of saving for their retirement, which is emphasised by the current high take up rate of the NHS Pension Scheme. The scheme allows many low paid workers the opportunity to save for their retirement so they can retire in dignity and not have to rely on future taxpayers.

Many of our members are relatively modestly paid, suffering from pay restraint that keeps wages below the cost of living. They are also fearful of the impact of health spending cuts and are angry and distressed that the Scottish Government, at the behest of the UK Government, is asking them to pay more in pension contributions. The reality is that many of our members will simply not be able to afford to make the proposed contribution increases and will have to opt-out of their scheme to their and the State’s future detriment…