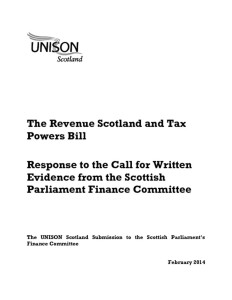 UNISON Scotland welcomes the opportunity to provide written evidence to the Finance Committee on the Revenue Scotland and Tax Powers Bill (RSTP Bill) and we will be giving oral evidence next month.

We will restrict our comments to areas of direct concern to our members’ work and to the issue of tackling tax dodging. The latter has been of considerable public interest recently, with many well-known names including Google, Amazon, Starbucks and others managing to pay tiny amounts of tax. And many companies that invest in controversial PPP/PFI projects are registered in tax havens. This is of concern as a matter of principle, but is made even more galling at a time when austerity measures are creating financial hardship for so many, particularly the most vulnerable…