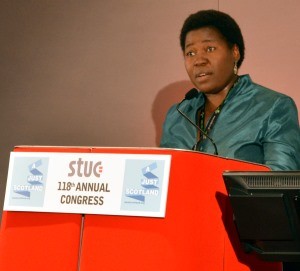 First time delegate and speaker, UNISON’s Priscilla Maramba, told Congress that ConDem austerity has worsened the plight of BME workers, and the rise of UKIP and media bias have added insult to injury.

Her comments came as delegates backed a campaign to support BMEs in the workplace, by lobbying for improvements and greater enforcement of equality laws, by challenging politicians and the media to make sure that racist behaviours don’t become the norm, and by fighting austerity at every turn.

Priscilla pointed to a Joseph Rowntree Foundation report in 2011 which showed that even then, low pay and unemployment were dominant features in ethnic groups, with barriers to employment, especially for women, a recurrent theme.

“Congress, the plight of Black workers in 2011 was pretty bad. With four years of Con Dem austerity measures it must now be catastrophic.

“There is a lot of underemployment with many Black workers working in jobs unrelated to their qualifications due to discriminatory practices and lack of support.”

Being in a union was important for all BME workers but even more so for BME workers who are activists.

“In these times of austerity characterised by temporary contracts, zero hours contracts and agency working it takes a lot of courage for BME workers to raise their heads above the parapet,” warned Priscilla, calling for more trade union mentoring to support BME workers in their role and to help them to realise their potential.