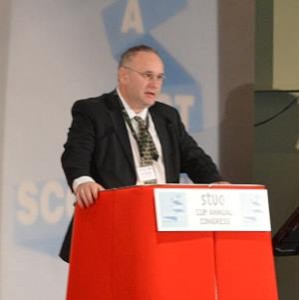 Delegates backed a Fife TUC call to oppose fracking and underground coal gasification (UCG) until their potential impact on local communities and the environment is fully investigated and understood. Instead, the STUC will lobby for the development of sustainable energy including investment in renewables and lower carbon emissions.

This mirrors UNISON’s precautionary approach with regard to fracking and UCG. UNISON’s Martin Murray called instead for a viable pathway to decarbonise our energy supply without further investment in unabated fossil fuels and shale gas fracking which have led to consequences “such as ignitable tap water, earth tremors and unexplained illnesses, resulting in millions in compensation paid to some in the US.”
In Scotland the plan is to drill in the Falkirk area within 400 metres of a school.

“If their plan goes ahead there will be over 400 wells in Central Scotland,” said Martin.

Declaring an interest as part of the concerned community of Falkirk, Martin also warned that current plans for underground coal gasification and setting fire to coal seams is happening in a triangle of about two miles wide with Longannet, Ineos and Airth, where they plan to drill, at each of the three corners.

“Mary Church of Friends of the Earth described coal gasification as the most experimental and frightening method of unconventional gas extraction threatening the Scottish Communities,” he said.