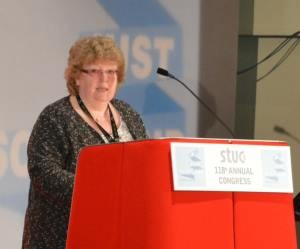 The STUC will work with NGOs and trade unions internationally to press for a Just Transition as part of a binding international deal at the UN Conference on Climate Change due to be held this year in Paris, which is “critical for the future of the planet.”

UNISON’s Pat Rowland told delegates that a Just Transition will ensure that the costs and benefits of switching to a low carbon economy are fairly distributed, with workers involved in planning.

Pat was speaking to UNISON’s amendment to a GMB motion, which introduced measures to tackle fuel poverty, as part of greening the economy and social justice.

“Climate change is one of the most urgent challenges we face and the United Nations talks in Paris in December are critical,” said Pat.

“UNISON represents workers in the energy industry. We want to see public, democratic ownership of energy. But in the meantime, it’s important that the STUC General Council demands energy market reforms that safeguard workers and all of us as customers.

“We oppose a race to the bottom that sacrifices service quality and sees massive job losses.

Pat added, “As we all know, fuel poverty is increasing to frightening levels. Nearly a million households are in fuel poverty in Scotland, the highest levels recorded.”

She told delegates that the average annual energy bill is now £260 higher than in 2010, and the poorest 10% of households have seen their energy bills rise nearly twice as fast as everyone else, while also being hit by welfare benefits cuts and/or pay freezes and squeezes. At the same time, the profit margins of the ‘Big Six’ suppliers have doubled from 4% to 8%.

“This is a scandal,” slammed Pat.

She reminded delegates of the Scottish Government’s duty through the Housing Act to eradicate fuel poverty as far as is practically possible by November 2016.

“We need major investment in energy efficiency, a win win policy for helping deliver warm homes and emissions cuts. We need an end to damaging austerity policies that are inflicting such harm on the most vulnerable people.

“And the Scottish Government must step up after missing the first three annual targets under Scotland’s climate change legislation, much-touted as ‘world-leading’.”

Referring delegates to UNISON’s 2014 report ‘Warm Homes into the Future’ which sets out how to meet the UK’s energy challenges, Pat urged, “If we want to set an example here and at the same time call on world leaders to agree in Paris to strong action, we need politicians at UK and Scottish levels to make sure energy policy and energy efficiency investment works for people and for the planet.”